The Elusive Highlander by Ju Ephraime 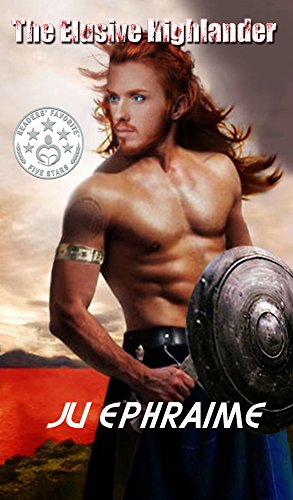 The story was a bit more complex than some other romances I had read. Two lovers denied their happiness by a treacherous poisoning. The mother of the murdered Highlander casts an ancient spell to keep him alive, but something is wrong and he wanders in time until he meets his love, in the shape of 21st century Coira, again. This meeting sends them both back to 14th century Scotland. There are a lot of elements to cope with in this book and some of it worked and some of it didn’t. As a romance this worked, there was enough sizzling dialogue between the characters and you could see why they would fall for each other. The history and the politics of the time was a suitable back drop. The descriptions of the beauty of the Scottish castles and scenery were lovely. Even the time travel element worked. The scattering of Gealic into the dialogue was just another distraction. I would have been happy if the mother was the only one to possess magic. To talk about Druids and Fae takes us in a whole other direction again.  It all was just a bit much to take in.
If you like to learn a bit more about Scotland but find the history books a bit dry, try and absorb it via this steamy romance set against the back drop of Robert the Bruce and the wars of independence. Ju has changed a few details for the benefit of a good story but she fills us in on these changes at the end of the book.
Posted by angela writes and reviews at 03:30