Smoke & Mirrors: and other stories by Tom Benson

I'm quite familiar with this writer and have even shared the pages with him on the Anthology 'You're not Alone.' So when he advertised that his bundle of short stories was free, I had no hesitation in downloading it. It is a short book and even shorter for me as I had come across some of them in other publications. However a good introduction to Tom Benson's work. 5 stars. 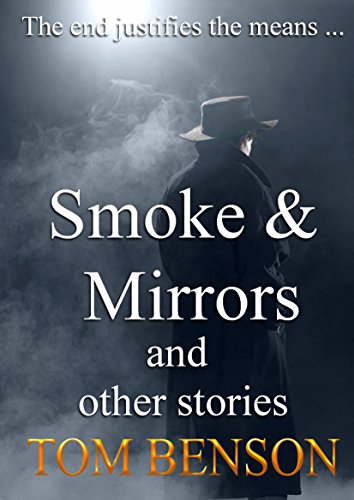 Smoke and Mirrors: and other stories by Tom Benson
This is a nice bundle of short stories. Short, but full of impact, drama and excitement. The themes vary, from an Alien criminal on the loose here on earth to a pilot trying to find his way to his downed plane in order to stop it falling in enemy hands. If there was one common thread it would be retribution, hence the tag line ‘The end justifies the means…’. There is something warm and comforting (somewhat nostalgic even in the Pawnee express.) in reading these stories; we encounter some good guys doing the right thing or a wronged person getting his pound of flesh. I think the writer really comes into his own when he sets his story in a battlefield situation. I know Tom Benson has a military background and it shows in the detail. It makes the stories that much more real and believable. Some of the stories have since or before appeared in other bundles, so if you have read some of Mr Bensons work you might have already come across some of these. If you are new to this writer it is a great introduction to his work. Recommended.

Posted by angela writes and reviews at 05:56 No comments: Links to this post

The Welcome: and other Sci-Fi stories


I love and hate Sci-fi almost in equal measures.  I don’t understand tech- babble at the best of times, add to this warp-speed, phasors and other futuristic tech-speak and I’m completely lost. What I do love is where the writer’s imagination can take you. Sci-fi is a wonderful blank canvas to paint your own colourful picture. In The Welcome: and other Sci-Fi stories, Tom Benson and his six guest authors have used their canvas well. If Techno-babble is used it is to quickly outline a futuristic world and to set the scene.  I loved that each of the guest authors had chosen a completely different theme and style; which makes this book a great show case for Sci-Fi writing. This is selection of short stories that is easy to read, with something for everyone. (Even for fans of erotica!) I gave this 5 stars.
The Welcome: and other Sci-Fi stories on Amazon

Posted by angela writes and reviews at 02:44 No comments: Links to this post

Not What You Thought? And Other Surprises by P.A. Ruddock

One of my favourite books are collections of shorts. It is a great way of discovering new authors, and I certainly discovered a few in this book. It is a combined effort by Mr Ruddock and five guest writers (Lesley Hayes, Tom Benson, Matthew Williams, John M.W. Smith, Peter Nena.) to raise money for the 'Forget-Me-Not' charity. Some of the stories were better than others, but a well deserved four star.

Not What You Thought? And Other Surprises by P.A. Ruddock

I love short stories, there is nothing better than to have a good short to entertain you during a commute or lunch break. No need to remember what was going on, or missing your stop as you were just so engrossed in a thriller. This book certainly entertained me. I can see mister Ruddock took great glee in what is an inspiration to many writers; fictionally murder the people that have gotten on your bad side. There are some excellent contributions from the five guest writers and the overall standard of writing is high. A variety of styles and subjects are used and the changes in pace work well. With such a mix of themes it was obvious that I would like some stories better than others. There is a common thread with many of the stories having a twist at the end. This mostly works well, but sometimes it is a twist too far. Life behind bars was for me a highlight and a low point at the same time. It is a powerful tale about arriving at prison after sentencing and I don’t think the twist was appropriate. I would recommend this book as it is a fine collection of shorts and the proceeds are going to the ‘Forget-Me-Not’ charity for homeless ex-servicemen and those affected by PTSD. Do good and have a great read at the same time; what more do you want!

Posted by angela writes and reviews at 01:33 No comments: Links to this post

At the moment, my cat Clicquot is my main inspirations. Although he does frequently interrupts me by walking over the keyboard, he is providing me with some great ideas too. I'm currently working on a book named Conversations with Tom. It started out as a series of short cat stories, but it is now more developing in a novel with a progressing story line. I still have masses of work to do before it is anywhere near to publication, but it is just a case of writing all these ideas down. However work and the increasing number of book reviews I'm doing are getting in the way. Talking of book reviews and Toms, here is my review of Amsterdam Calling. A recommend if you're going to Amsterdam.

I like the way this story started in three different locations before the separate threads converged in Amsterdam. The book is part thriller, part romance. The blossoming romance between the two main protagonists Crystal and Dan develops during their research into her family. They’ve met by chance and because Dan feels an attraction to this American woman he helps her track down her remaining living relatives. They delve into her family’s history while he shows her the sights. Dan, a Scottish investigative journalist is laying low in Amsterdam after exposing a criminal gang. Neither knows that they are both being followed by people who intent to harm them.
I looked forwards to reading this book by Scottish writer Tom Benson, as I lived the first 20 years of my life in Holland (or the Netherlands as Tom correctly points out) before moving to Scotland. I’ve visited Amsterdam on many occasions, but after starting this book it became clear the writer knows this city better and that I should pay Amsterdam another visit. Tom has done his research well and it shows he loves the Dutch capital. However I found all the detail got in the way of actual plot of the thriller, which I would’ve liked to be more fleshed out.
I would love to take this book with me on my next visit to Amsterdam. I think this book will be most enjoyed as a travelling companion to Amsterdam and a light holiday read.
Posted by angela writes and reviews at 05:42 No comments: Links to this post