Today the 19th of November Monaco shuts down and celebrates its monarchy and national day. I get to enjoy an extra paid day off and of course as sods law will have it, it’s pishing doon with rain.(As we say in Scotland) Down by the port in Monaco there has been a fair with all sorts of brightly lit attractions to entertain children of all ages and all over town red and white flags have gone up. Shops have decorated their windows with roses and little flags and Place du casino is a sea of red and white.

I do believe that this colourful out pouring of patriotism is genuine; Monegasques have a lot to be grateful for. This tiny principality of 2.02² Kilometres has seen a huge improvement in its economic fortunes in the last century. In a short time it has gone from tiny place stuck between the rocks and the sea without any natural resources to the planet money it is today. 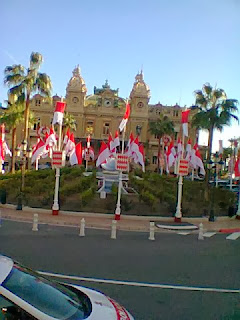 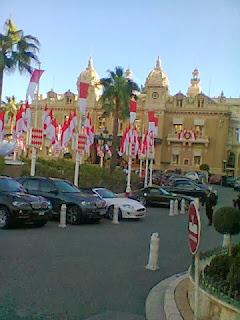 The Royal family is loved here and they’ve had a huge influence in making Monaco what it is today; from building the casino in the late 19th century to attracting major financial institutions. Some people might say that only a few families have an awfully big say in what goes on in planet money, but today you will hear no criticism. Being such a tiny place it is inevitable you bump into a royal at some point and even I in my short period working here have met one of Albert’s nephews. So the relationship the Monegasques have with their monarch is often a personal one. I’m sure despite the rain Monegasques will turn out in force to cheer on Albert&co.


So happy fête du prince Monaco, may the good times last!
Posted by angela writes and reviews at 02:16 No comments: