One of the lovely things about being part of a writers group (IASD) is to share our experiences. Being it our highs or lows, other writers sharing help us connect better with the world. A few years ago I would not have considered blogging and engaging on other social media. Kayla Howarth is one of the success stories coming out of our group. She must be very hard working as I see her name popping up everywhere and her books are now getting the attention they deserve. She has taken the brave step to concentrate fully on her writing and I think it is paying off. Book 2 in the Litmus series has just been released and I thought it was high time to see what Kayla has been doing with her time. I enjoyed the Institute series so I knew it was not going to be a chore. I'm glad I found this a five star read too. 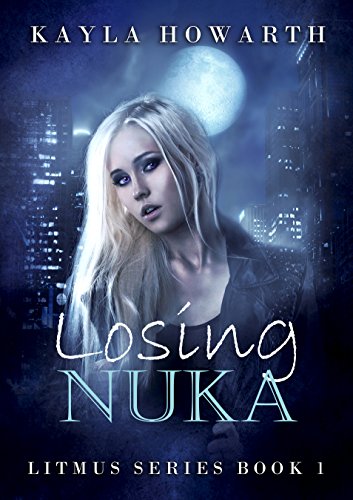 
Losing Nuka is the spin off from the Institute series, of which I devoured the first 3 books. First the good news; Allira married Jayce and had a baby together (yeah!). The couple live happily together in the suburbs with Nuka, William and their daughter Illyana. Now the bad news; time has moved on from the end of the last book and the little six year old Nuka is now a stroppy 18 year old teenager. She knows Allira isn’t her real mother but when she starts digging into her back ground she discovers that a lot of things were hidden from her; including who her birth mother is. From here on the book could be carrying the tag line: Be careful what you wish for, lest it come true. Nuka blunders into the world as only stroppy teenagers can and starts looking for her biological mum. Her privileged back ground does not prepare her for the underground world of illegal fights (Litmus) and all other sorts of shenanigans her biological mother is involved in.
The style of this book will be familiar to Kyla’s fans. We see the world from the perspective of the main character; Nuka. We experience her love, pain and doubts first hand. We might not have great sympathy at the start for this girl but as we experience her growth as a woman so directly, we certainly have a few chapters in. The dialogue is again sharp and packed with humour. Especially when Nuka and her love interest Brett are sparring it out. There are some good characters here and the action comes thick and fast. I found myself rubbing my rib cage as I joined Nuka on her journey into the belly of Litmus and she had her ass handed to her after a rough fight. Great stuff Ms Howarth. It would be better to read the institute series first as this is a continuation of the story, but I think you would have no problem reading this book as a stand-alone. Most of the returning characters are explained just not in great detail. Looking forwards to Saving William, the next in the Litmus series.
Posted by angela writes and reviews at 03:41 No comments: Links to this post

The Institute by Kayla Howarth

This week I've been reading young adult science fiction. This one was a bit different from the rest as it was well written and had plenty of action. I might be getting a bit to old to read about angst ridden teenagers but I certainly recommend this to a younger audience.

The Institute by Kayla Howarth

In a future where the population has been decimated by disease and a nuclear explosion, some humans have come to possess special powers. The authorities deem these people to be defective and have started to round them up and place them in The Institute to be cured of their dangerous abilities.
Allira Daniels lives with her father and ‘defective’ brother Shiloh. They move around a lot and Allira has perfected living her life being almost invisible. Then one night she helps two car crash victims and everything changes.
Kayla Howarth is on familiar territory with a dystopian society where being different is not tolerated, but what makes this such an entertaining read is the main character Allira. She struggles with putting herself before others, harbouring a secret while falling in love for the first time. She is narrating the story and we experience her thoughts, fears and insecurities first hand. Her love life is complicated to say the least which leads at times to hilarious situations. She is a sympathetic character I could easily relate to. The story moves at a quick pace and I was glued to my kindle for hours at the time. There is plenty of action and a great ending that sets the book up for the sequel.
What I liked about the book is that even though it is set in the future, it still is a society we easily recognise. People still ride the train and use telephones which made this story easy to follow and relate to. The characters are well drawn out and believable. I certainly look forwards to reading the sequel.
Posted by angela writes and reviews at 04:02 No comments: Links to this post