Being a good citizen 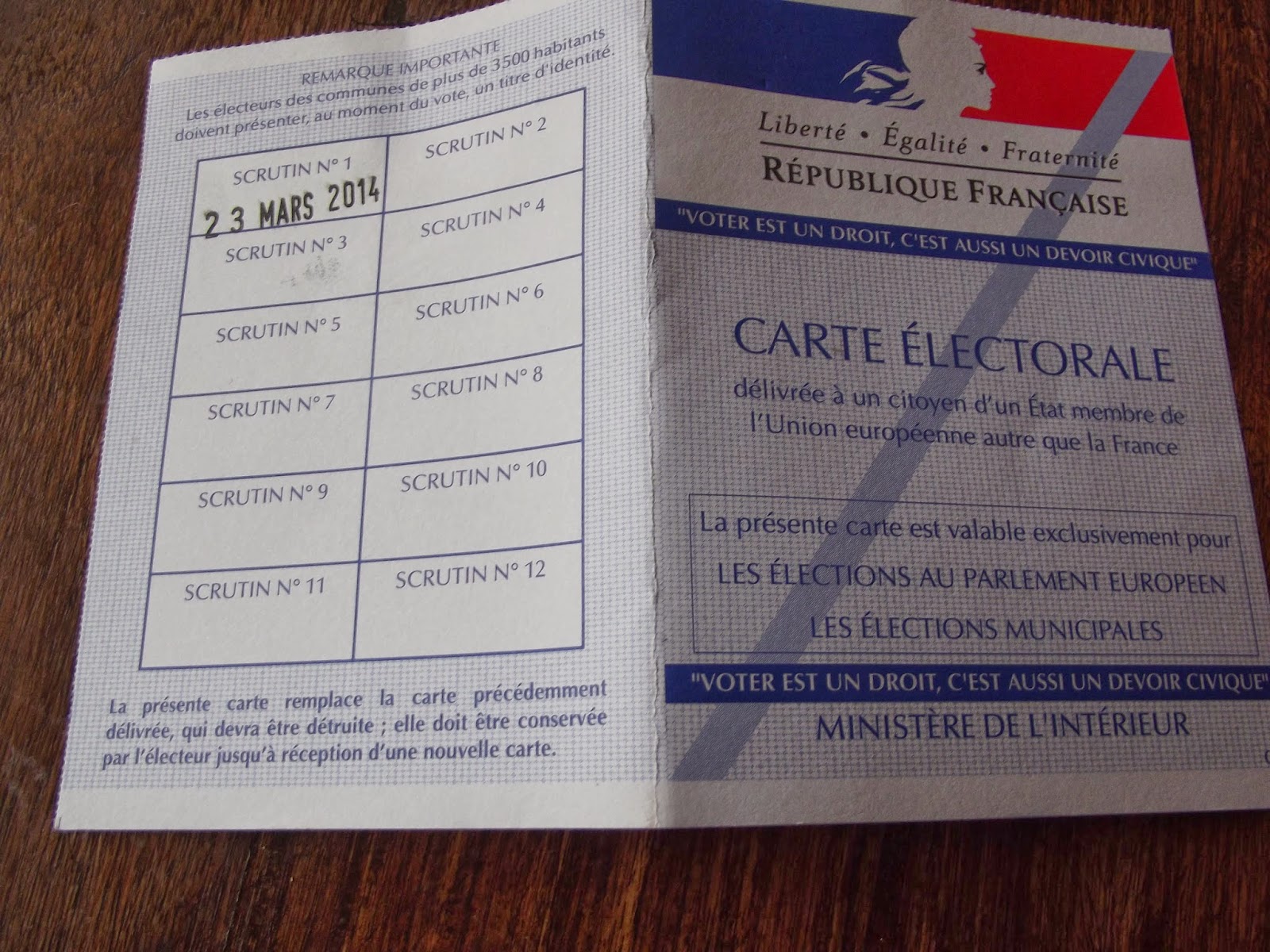 It has been a wee while since my last blog posting; work, cat and life in general getting in the way. Cat has now been drugged with some food and is snoozing to digest the crunchies and I'm trying to ignore all other things that need to be done. I hope to get this blog written before I start work at 13.30.

Last Sunday we had local elections here and it was my and my husbands first time that we could vote in France. I had been rather puzzled by my poling card as it didn't mention when the vote was; you're just supposed to keep your eye on the news. I could have done some more research before heading out, but where is the fun in that. Learning the language is so much more challenging when you know nothing and have to ask questions to do the right thing. (Well that's my excuse for being ill informed.)

We turned up at the poling station excitedly waving our polling cards at the friendly volunteers. They requested ID which we duly produced. Then we were directed to a table with a flyer for each candidate with a bemused smile.
'this isn't a very secret ballot' protested I.
The volunteer explained with a patient smile which he normally reserves for a not too bright child, that I had to take one of each, go behind the curtain and pick one, put it in the envelop provided and discard or take home the rest. I did as asked and put my vote in the ballot box. My chest swelled with good citizenship. We both got our polling card stamped with a date. This led to much hilarity as we speculated what would happen next.

Is the exit poll the Binbag? Does someone count the discarded flyers? (That's 80 times not you mate:))

The next round of voting is on the 30th do we get to vote again? Is it going to be a run off between the top 3 candidates?

The poling card has 12 boxes, do I get to vote more than once?

If I fill up my card do I get a free Pizza?

If I get to vote once for local and once for European elections, does this mean I have to hold on to this card for 24 years (assuming we vote once every 2 years)?

If I lose this card, do I lose my right to vote?

I promise I'll grill a french colleague before the polls open again on the 30th of March, but for the moment I like the option of voting 12 times and getting a free Pizza.

Holiday ! This might seem a strange thing to say for someone who just started a new job, but 3 days in I can’t seem to shake this holiday feeling. It might have to do with the fact that I’ve spend my breaks in the departure lounge of terminal 2 at Nice airport. My work background noise is a mixture of easy listening and flight departure announcements. My day is spend the way I normally pass the time in departure lounges; by trying out all the perfumes. I clean the shelves and ring up purchases too, but these are minor details.

I’m still in that honeymoon period of discovery; meeting new colleagues and learning about the products and so far I love it. I might be blogging in a few months about the smell of perfume bringing on a panic attacks or having a fear of departure lounges. I might need to wait till the last minute to clear security and then run to the departure gate on my next flight. I might breathe a sigh of relieve when I’m in the actual plane and they start taxiing. I could startle the other passengers with a wild scream when we commence our take-off; ‘Woohoo, I’ve just survived the departure lounge!’

So far so good, the only snag is the fact that at the end of the day, I don’t get to take a plane to some exiting destination. I do however get to drive my scooter home along the beach, and the weekends; well those I get to spend in the south of France, and how cool is that?

Posted by angela writes and reviews at 01:20 No comments:

This Saturday I received an email from my new employer that I will be starting work on Tuesday. This was not totally unexpected as they said they wanted me to start as soon as possible, however the predicted time for the relevant paper work meant that we penciled in the 11th of March. So starting one week early had me a little panicked; there is still so much I wanted to do!

It was also a lovely sunny weekend and I should enjoy my last weekend of freedom, shouldn't I? I managed to have a swim, a walk and a well deserved beer on a terrace. I also did a few more hours of writing and I'm pleased to say the book is finished and I'm happy with it. When I wrote the first draft of my first book, I was pretty clueless. I knew I had a good character, but putting a book together was another matter. My friend and editor Penny guided me a lot during the following drafts and rewrites.

Book two is hopefully equally funny, I certainly think that the copy I now have on my computer is better written, thought out and testament to a more confident writer. I'm starting to learn what it takes and I'm not going to give up on publishing. I know my new job is going to keep me busy over the next eight months but I will try hard to keep my fingers on the keyboard.

It feels like I haven't achieved as much as I wanted, but when I take stock of my two months unemployment, well it's not bad. I have finished the book and I'm happy with the result and I've written 5 short stories. (they still need a bit of work but nothing a few hours without a cat distracting me won't fix!)
It might go a bit quieter but keep watching this space, there will be more releases!
Posted by angela writes and reviews at 08:54 No comments: