This week Cameron’s acquaintances have been in town as the Monaco yacht show was on. A small flotilla of luxury yachts have been moored outside the port, which itself was filled to capacity. This is the week when the great and the good come to planet money to pick their next boat. I have been enjoying my lunches overlooking the bay, as I’m picking out my first boat. The difference is that I’m only working on planet money and owning a yacht will probably remain a dream.
This is the problem with this place; all of a sudden your dreams become bigger. I never imagined having a boat, especially not anything over 30 meters. Now I’m having the following conversations with my colleagues:
‘Mr X just got a new yacht, he paid 5 million euro’s for it’
‘Oh, he won’t get much for that’
The other night I was walking to the station, when I spotted a Bugatti Veyron (it’s a very expensive and rare car and a petrol head’s wet dream) with the obligatory group of tourists circling around it with their cameras. I was tempted to tell them that there was another one parked around the corner in a different colour. I was in a hurry and I’m trying to stay nice. I do understand how Cameron got corrupted by planet money. It is easy to get your head turned and start seeing this world as normal. Luckily there is always the pauper train home, which now has standing room only as I have to share it with equally tired yacht show sales people on their way home to planet reality. My sore feet are still firmly on the ground. The weather has not been great and the views overlooking the port are mostly prettier, but I'd thought I better take a picture of the port being filled to capacity. 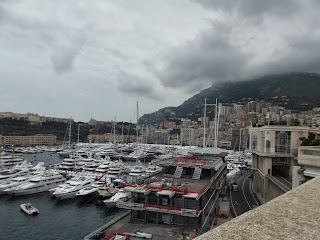 Posted by angela writes and reviews at 01:42 No comments:


The internet, it’s a wonderful thing! To quote Cameron, after he convinced a German man he met on line to let him drink his blood. Not quite the shenanigans I get up to, but I do find myself online a lot. Gone are the days when you had to send thick paper copies of your book to agents in the hope to get published. I decided I won’t even try as I think most agents reach for the bin if they read ’Vampire.’ I do believe I have something new, quirky and lighter hearted to bring to the genre, so I went with Amazon KDP and self-published.
So that was the easy part over with. The last few weeks, whenever I’m not working, I’m on my computer; promoting, writing blogs (Like now, in Monaco station with a coffee overlooking the port!) and trailing through and replying to endless emails. KDP is great; you can see your sales, do promotions and upload another copy of your book if you spot any errors. (I hope all is well now a friend has done another proof read. Some chapter headers come up in Blue, but I’m working on understanding why that is happening)
So I know that the free promotion went well; about 53 serious bloggers and reviewers now have a copy of my book and I’m waiting excitedly what will be the result. One thing I’m a bit puzzled about; the book has taken off to an extent in Germany. I haven’t written to any German bloggers and I’m not in contact with any of my German family. A large part of the book is set in that country, so is it because of some random Googling that my book is being noticed over there? As I said: the internet is a wonderful thing!
Posted by angela writes and reviews at 23:20 No comments:

This weekend I'm giving away my book for free in the hope of it getting reviews and promotion to a wider audience. Looking at the KDP reports the take up has been good and I'll be interested to see the results in coming weeks. I have been concentrating on the blogger community and it has already resulted in one blogger promoting it as a Saturday steal on her site:
http://andreareadsandreviews.blogspot.com
What I'm slowly finding out is that writing the first book was easy. I don't want to sound flippant as I know many struggle with getting a book out there, but I was lucky.
Most of the time it felt like Cameron my main character was walking along the beach front with me, pointing out tasty dogs, attractive yachts, or telling me his life story. The second book is proving harder and not only because I have less time to write. Cameron is proving to be a rebellious vampire, going off to places I don't want him to go, but he has to do his own thing. I did eventually convince him (forcefully) to go to Monaco, which I'm enjoying greatly but Cameron less so. I think we have now agreed on a direction and the book is reaching it's conclusion. Still a lot of work to do, but the beginning, middle and end are there. As I'm promoting the first book, I'm realizing the importance of getting a second one out there fast. I mean if they like your book, they want to read more!
Posted by angela writes and reviews at 01:09 No comments:


Don't worry, this is not a harrowing story of unfortunate souls clinging to a leaking ship in the hope of reaching a safe shore and a better life. In Monaco, or planet money as I like to call it, boat people are the poor souls that arrive on a cruise ship, hoping to get a photo of a better life. They mostly climb ashore in Villefranche sur Mer, about half way through my train journey. They look around them bewildered holding on tightly to their maps and brochures, hoping they've gotten on the right train that will take them to Monaco. I can see the fear in their eyes as they turn to me and struggle to remember their school French. I mostly let them muddle on a bit before replying in English. I mostly see  them later in front of the casino, taking pictures of the fancy cars parked in front of it.
Shopkeepers reluctantly open their doors to them and quietly mutter under their breath as they leave;
'If you have to ask the price dear, it's obvious you can't afford it'
Every day I tell myself that planet money is not the norm, it is just a bizarre place I come to work.
One joke doing the rounds at the moment is about a french man coming to open an account with a bank on planet money.
'I would like to deposit a million euros' whispers the man.
The cashier whispers back 'that's OK sir, we take all deposits, poverty is nothing to be ashamed off.'

Posted by angela writes and reviews at 06:05 No comments:

On my rare day off I'm trying to promote the book. It is hard to get noticed in a world saturated by self published books. The only way to stand out on Amazon is by the amount of 5 star reviews. I don't want to rely on friends and family to write reviews. People notice these things and won't take the reviews serious. I decided that to get reviews I'd do a free promotion for 5 days. It will run from the 20th to the 24th of September. I have advertised the promotion on various blogs and I've written to a few bloggers. Fingers crossed it will have the desired result. So far reaction to the book has been very positive, so I know if I can get more people to read it, it will take off.

Posted by angela writes and reviews at 03:28 No comments:

I decided to give my blog the subtitle: The background. I hope to keep you informed of the background that has inspired me to write Language in the blood and hopefully a bit about the material that is inspiring me in writing the follow up. There is plenty of material but not much time to write it all down. I currently take the train every day to work in Monaco; the playground of the super rich. Being surrounded by all this wealth and glamour, it is easy to dream up Cameron's next adventure. Working in Monaco does require me to take a train at 8.45 to start work at 10.30, not that the trip takes that long (40min) but frequently something goes wrong and we experience delays of up to 50min. At night I arrive home at 9pm, which doesn't leave me much spare time to write. I carry a note book with me everywhere I go, and often having my lunch overlooking the port of Monaco, an idea will come to me. I'm pleased to report that I have about half a book ready.

Posted by angela writes and reviews at 23:29 No comments:

Getting to grips with technology

If writing a book has done one thing; it dragged me screaming and kicking into the 2010's!
To promote the book I have been getting familiar with book blogs, following bloggers, setting up a Google account(As Facebook is no longer enough and by the looks of it going out of fashion fast.) and now I have hesitantly joined the blogger community itself. Well here goes, I'm putting myself out there!

Posted by angela writes and reviews at 04:10 No comments:

Language in the blood by Angela Lockwood is now available on Amazon;
Check out my website: http://www.cruftslover.adzl.com/
Posted by angela writes and reviews at 04:03 No comments: