Primed By The Past: Introducing Detective Annie Macpherson by Barbara Fagan Speake

As I'm still reeling from the Brexit vote, I'm trying to take my mind of it by reading and writing. I wonder what Detective Annie MacPherson would have made of it all. She and my husband are Scottish and I lived there for 20 years. Scotland voted overwhelmingly to remain, but will now see it selves being dragged out of Europe. Worrying times ahead for all of them. The Annie MacPherson is the heroine of the novel I'm reviewing and it was a great work. Full of surprises and a 5 star read. 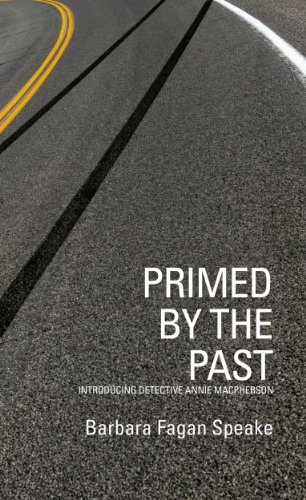 Primed By The Past: Introducing Detective Annie Macpherson by Barbara Fagan Speake
Annie MacPherson is a Scottish detective on an exchange program to the Westford Police department in the USA. She has broken off her engagement to her fiancee and is hoping to forget her heartbreak with a fresh start in a new country; a chance to learn and become a better Detective too. Her first case comes with some guilt: The victim who was beaten nearly to death had come to seek her help only a week before. As they delve into victim’s life, a number of suspects are questioned, but Annie feels there is a deeper, but yet unknown motive for the brutal attack. As the book goes on we discovering more and more information; I was hooked and on the edge of my seat by the time of the nail biting finish. This first book in the Annie MacPherson detective series is a promising start indeed. Gripped from start to finish I followed Annie about as she got to grips with her first case during her secondment. I think what makes her so likeable is that she is an ordinary woman; someone I could totally relate to. She has a few problems back at home. She is affected by them, but dedication to her work drives her on. Meticulous police work and trusting her instincts make her extraordinary. She is also a real woman, someone that cannot help herself from falling for the victim’s brother and feeling jealous when he grows close to the victim’s best friend. I feel I got to know this woman well and I want to find out where her work and love life will take her next. Bring on the follow up Programmed to Kill.

Posted by angela writes and reviews at 08:43 No comments:

Work in progress a preview


I'm working on a bundle of short stories. They are going to be in the form of a journalist interviewing characters. Traveling always gets the creative juices flowing and my recent trip to New York compelled me to write a little satire about the airline industry. I'm not saying we had to stand on our way back, but I felt a bit herded and prodded. Enjoy.

I lived my own fairy tale last week as my husband and I finally got to visit New York. What a fibrant beautiful place it is. It had been on our bucket list for a long time and I'm glad it lived up to our expectations. I was sure a visit to New York would inspire me and I've got some great short story ideas. (One will be a satire on the airline industry as I was not impressed by their practice of overbooking flights!) Needless to say, being in a city like that didn't give me much time for reading. I did manage to finish this very naughty fairy tale and rated it five stars.
Sleeping Beauty (Flirtatious Fairytales) (Volume 2) by Jess James


Hell has no fury but a woman scorned. A king finds this out to his cost as he casts aside a woman to marry another who is of royal blood. The scorned woman we know as Mistress M very patiently works on a plan to corrupt the Kings only daughter; a plan that takes nearly nineteen years until the innocent princess starts to blossom into adulthood. This is a wickedly funny and modern take on the fairy tale Sleeping Beauty. It is well written and sexy. I recommend this to anyone who likes their romance and fairy tales with a little more spice. Definitely not for children.
Posted by angela writes and reviews at 01:32 No comments: