As I mentioned previously, Romance is not my favorite genre, but this book turned out to be more than that. It luckily was mostly devoid of the will they wont they, longing looks and yearning hearts. There was also a more gritty story line to keep me entertained. That I read this book in a few days says a lot, so I'm happy to give this a five star. I also like to mention that the cover of this book was designed by Paradox book covers, that recently revamped my Language in the blood covers:)

Injury by Val Tobin on Amazon


Daniella Grayson seems to have it all, a successful career in films, money and good looks. Her reason to seek the limelight been the abandonment by her father when she was five; somewhere out there he might be watching her and proud. I thought this was a very touching and realistic motivation for the character to be into acting. Then they find Daniella’s father’s body and her abusive mother is arrested for his murder. What I liked most about this book is the character of Daniella, she had to cope with a lot in her young life and being from an abusive home, she fell into an abusive relationship, which led her to drugs and alcohol addiction. She managed to walk away from that and turn her life around. She’s not a victim and able to steer her life onto the right path, despite her past conspiring against her. I would say this is a romance, but there is also a tense thriller story line within it. It’s well written and easy to read, it kept my attention from start to finish. The love scenes between her and Cope are quite hot and steamy, but not too explicit. I would recommend this if you like romance with a grittier edge. Very enjoyable read.

Posted by angela writes and reviews at 02:11 No comments:

The Gamblers by Christoph Fischer

At the moment we are enjoying (Maybe not quite the right word!) a heat wave here in the south of France. The temperature tops the 35°C some days and I've not seen rain since early June. I'm fortunately I have aircon in my flat, so I can keep on working. The response to the book cover has been very positive and I've seen a few sales. I'm continuing to promote on twitter and have build up a decent following that retweets my posts. August will be interesting as I have another free promotion on the 1st and 2nd. I'm not doing anything different from the last time so it will be interesting to see if the new cover will help me give away more copies. I'm also getting some reading done and the last one was a real pleasure that deserves its five stars:

The Gamblers by Christoph Fischer


Ben is an accountant obsessed with numbers. He looks for patterns in card games and even the lottery. Whether it is his luck or his system, he doesn’t know but he finds himself the winner of 65million in the European lottery. Due to his obsession, Ben has never had many people in his life, but during an unplanned trip he meets an attractive stewardess; Wendy and a charismatic gambler named Mirco. The two become the main people in his life.  What Christoph fisher has done here is create a very clever book around the question; when it comes to large sums of money, who can you trust? He has created a wonderful character in Mirco, who introduces Ben to all the temptations that money can buy. You know he is a player but is he genuinely Ben’s friend? Is the beautiful Wendy just too good to be true, or is she really in love with Ben? The author has you guessing to the very end. The characters are engaging and you just want to keep reading on to find out what is going on. When I started to sense that something is going on I held my breath rooting for Ben not to walk into any traps that could see him relieved of his money. I enjoyed this book very much.

Posted by angela writes and reviews at 03:11 No comments:

When I started out as a hapless writer, I didn't want to spend any money. I didn't know if any one wanted to buy the book. One thing I did shell out on was a proper edit. Reading a lot of Indie writer now, I realise the DIY approach is not always the right one. Don't get me wrong, some clever writers can edit, design and are marketing experts to boot, but most of us are not. Much as I liked my original weird dog photo, it stood out on the virtual book shelf as some weird art students project, not a sexy book cover. Much as we writers hate it, a book does get judged on it's cover.
I put my feelers out amongst my supportive writers group and got recommended; Patti Roberts at Paradox book covers. Judge for yourself but I think the new covers look very sexy! 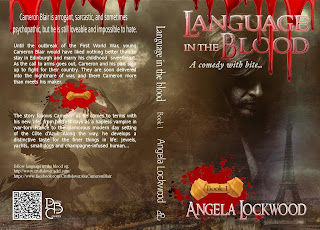 And Book 2 is new and improved too! 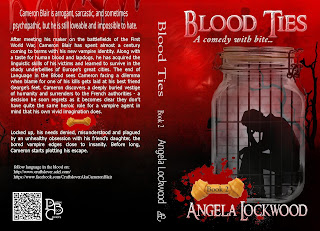 Now I need to think long and hard about printing. I've been told that the Amazon createspace printing service is free and you get the books at cost. So I think that will be the next exciting bit of news I'll be sharing with you.

Posted by angela writes and reviews at 06:58 No comments:

This was a very quick read so you're getting another review from me. Romance is not my preferred genre, but as a reviewer I have to be objective and just judge if other people would like it. I gave this 4 stars. I've contacted the writer about some editing issues, but again this did not influence my rating. Nothing a few beta readers can't sort.

Daniel Spittle is the film star that seems to have it all, fame, money and a different gorgeous girlfriend on his arm each week. But the public doesn’t get to see the real Daniel who is hiding behind this womanising exterior. His agent decides that a journalist should follow him around for a few weeks, to introduce the real Daniel to the public and so Ella enters his life. This book was a light read and I finished it in a few days. I have to admit that I’m not a huge fan of romantic novels and got a little impatient with the story line as the characters wrestled with their feelings for each other. I shouted a few times at my kindle “kiss her already you fool, her boyfriend is a twat that doesn’t appreciate her!” I liked the storyline with the stalker and could have done with a bit more of her. I would recommend this if you like your romantic fiction.

Posted by angela writes and reviews at 08:10 No comments:

Tower of Tears (The McClusky Series Book 1) by Rhoda D'Ettore

I do like historic novels, and having lived as an immigrant of sorts for the last 25 years, I was keen to pick up this book. I can safely say I never had to endure the hardships Jane McCluskey suffers in this book:) This was a well written and entertaining, if very tragic account of an Irish immigrants in the 1820's and I give it 5 stars.


This is a gripping and tragic story of a young Irish woman, Jane McCluskey, immigrating to America in the 1820’s. The author has clearly done her research and paints a vivid and harrowing picture of the journey to the Promised Land. Jane makes the trip with her infant son, while her husband stays behind to save up for his ticket. It’s a decision they soon both regret as life in America doesn’t turn out the way Jane hopes and her husband copes badly with being on his own. The book heartbreakingly illustrates the trap women found themselves in, caused by poverty, discrimination, the law and the church. In one line, Jane overhears some racist comments about the black community and wonders; if I barely make a living as a white woman, how hard must it be for them. Sometimes we need to read a book like this to appreciate our modern conditions and freedoms.
What I loved about the book was the host of strong female characters. Many tragic things befall Jane, but she finds strength in herself, her family and a female friend she met on the trip over. I liked that the writer immersed the book in period detail; from descriptions of the ships water desalination system to the use of 19th century language. The book is easy to read as the pace is good throughout and the chapters are short. I don’t want to give anything away about the plot, but I could have done with the book maybe being a little shorter. At one point towards the end, we switch from following the female character to two male characters. The story was still good, but I probably felt less engaged at that point, because the characters were male and the story was more upbeat. The book neatly wraps up all adult story lines, but one of the children starts wondering about what dark secrets her family might be keeping from her. This sets things up nicely for the second book in the series, which I hope will be coming out soon.


Posted by angela writes and reviews at 04:37 No comments:

Hope to get some reviewing done and make a start with redesigning my book covers. Now I do more promotion, I see that other authors have much more professional looking covers and adverts. I've downloaded a snazzy looking free software package called Canva. However having played with it for a few minutes I can see that this is going to take a long time. So back to reviewing, here is mine for the following book, available on Amazon:

This bundle of short stories inspired by Hawaii s not for the faint hearted. But if you’re ok with a well written book, that contains some scenes of rape and mutilation from the get go, I’ll say go for it. The theme throughout is Hawaii, its people, gods and traditions. The writer is not a native to the islands but she has a sensitive and insightful touch and I can feel she has a great love for her adopted home. Many of us think of Hawaii as this Island paradise, which makes these stories maybe more, shocking. Paradise stays interesting for a little while; but it is the darker underbelly that is far more intriguing. I especially like the last story that carries the tittle of the book and nicely puts the whole book in context. This is talented writer with a wicked dark sense of humour. I’ve recently read some other work of hers in the anthology ‘you’re not alone’ and I’m pleased her work continues to go from strength to strength.
Posted by angela writes and reviews at 03:05 No comments: