In one of my previous posts I showed you how Monaco has spared no expense into turning the place into a Christmas picture post card. All very pretty but unrealistic. It is 13°C here and it is unlikely we will ever have a pack of snow like the artificial pack that is lying outside the Casino just now. In Cros de Cagnes where I live they have decided to work with the local trees; the wonderful palms. 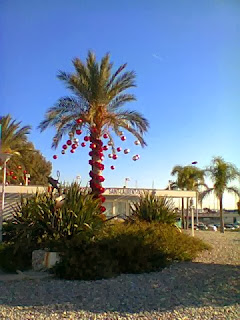 Now when I say local trees I will have to admit that some of the varieties of trees were introduced here by the British. From Africa came eucalyptus, from Australia mimosa, and in 1864 the Phoenix Canariensis was introduced better known as the palm tree. The palms, mimosas and eucalyptus trees introduced by the Brits absolutely thrive in this climate and I think they are a marvelous addition. I found a great bit about the history of Cannes on the following site:
http://www.riviera.fr/cannhist.htm

At home we decided to embrace a local species too and went for a Christmas lime tree instead of the customary pine. Limes make very fetching baubles and an even better Gin and Tonic.

Then at night the lights come on and the boulevards in Nice and elsewhere on the Côte are lit up by rows of festive palm trees. Christmas spirit and not a flock of snow, fake or otherwise in sight. 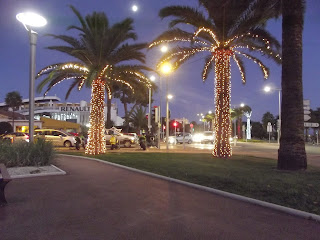 Posted by angela writes and reviews at 01:55