The book promo is going well, so far I managed to sell about 60 books and the countdown runs till the 9th. The next couple of weeks will reveal the full impact, but it's encouraging. I also reached another milestone in getting over a 1000 twitter followers. I still have to be convinced about twitter. I spend many hours doing tweets and retweets and met some interesting people, but as regards to book sales, well I think it is probably a waste of time. I'll sit on that fence a little longer and tweet on:)
Now back to my cup of tea; vampires. This was an interesting one and some new fresh ideas here. It was a short story, but one that will be part of a seven book series. Five stars. 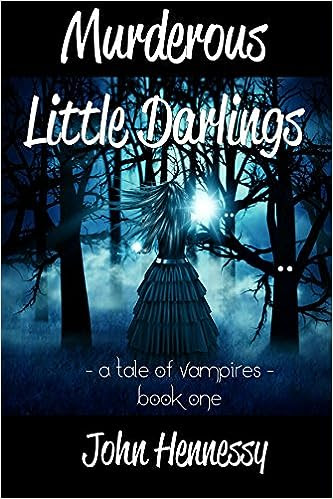 
What a tasty morsel this was. It was very short and I’ve would have liked to get my fangs into something a bit longer, but the good news is that this is part one of seven. This excellent short story starts a promising series.
John Hennessy very cleverly messes with his readers minds. Firstly his characters are young children; they have the faces of angels but are capable of gruesome and violent acts. Marcus the oldest of the three siblings has fully embraced his vampire nature and tries to get his siblings to follow his lead. His brother is easily manipulated, but his sister objects. Here the author messes with us again by throwing doubt on the assumption that Marcus is a vampire. Is he just a disturbed young boy that thinks he is a vampire? Vampires are just a myth, right? Marcus, despite his young age, is a manipulative character and I found him quite chilling. People who like things clear cut and logical might have a problem here, but I took it as a story told from the perspective of the children. You get three kids in separate rooms and you get three completely different stories and two will be far removed from the truth. (At times this might even be a little trippy.) The ending was unexpected but a little sudden. I do hope that in the next stories we will delve a bit deeper into the lives and backgrounds of the three siblings (or that the reader gets further messed with). A different take on the vampire genre and certainly something I want to read more of.
Posted by angela writes and reviews at 10:02