Dawn of Rebellion by Michelle Lynn

Exercise for today is to just pick up a random book. Don't read the blurb, just start reading. I often download free books and don't look to closely at the blurb. Sometimes I have the wrong idea about a book and it can be a bit disorienting. (Like this one which I thought was about the American war of Independence, but then I read about London and cars etc.and it dawned this was not a historical novel) I always like to be surprised, I think it ads to my reading pleasure. So this one was a surprise, but a good 5 star one. 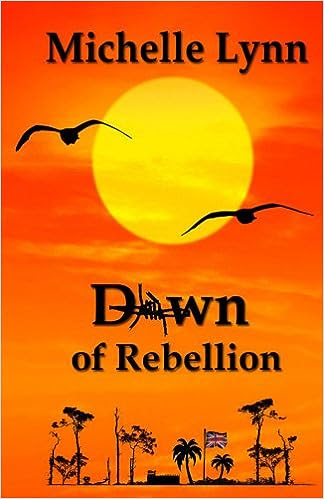 Dawn of Rebellion by Michelle Lynn


I have a habit of not reading book blurbs carefully and I’m often surprised when I start reading a book. I got all comfortable with my kindle and sat down to what I thought was a novel about the American war of independence. I didn’t mind one bit when I found myself reading a YA novel about two sisters, Dawn and Gabby surviving in a future version of London where a totalitarian regime rules. The former United States is once again a colony of Britain. When Gabby is arrested for shoplifting, she is shipped off to the colonies. Her sister Dawn and Gabby’s boyfriend Drew start a desperate journey into the unknown to find her.
This is a story about young people discovering a strength and bravery within that they didn’t know they possessed. It is also about the power of love making you discover this strength. The book is narrated by Gabby, Dawn and Drew. The chapters are named after the narrator so this doesn’t get confusing at any point. The story has a quick pace due to short chapters, lots of action and narrator changing all the time. All three talk in sort of cockney London accent, that I found very amusing. It made Dawn and Gabby believable as two streetwise London kids.
This is firmly a young adult novel and the budding romances between Dawn and Drew and Gabby and Jeremy will please this group of readers. Also the action is good and there are a number of cliff hanger moments, including the ending. (Got to leg it to Amazon and buy part 2) The book is also laden with symbolism as the group find bits of a former civilisation and inhabitants of a land that used to be the United States. No one knows what destroyed this civilisation, but religion is now banned in Britain. This mix of all destroying war, religion and world powers, makes the book current and interesting to adult readers like myself too. I will be interested to see where Michelle Lynn will take this story next. Promising start to a series.
Posted by angela writes and reviews at 09:04

Email ThisBlogThis!Share to TwitterShare to FacebookShare to Pinterest
Labels: Dawn of Rebellion, Michelle Lynn, YA